Not all NBN Services are the same!

NBN services can have as much variance as older technologies like ADSL – it all comes down to the final path of the  connection into the site and the carrier/ISP.

We have a customer that had an existing NBN connection (FTTP) that was provisioned at 100/40Mbps. So technically they should get that or close to it on a quality service.  What we observed was they were getting far from that.

On this particular business site they had a FTTP (Fibre to the Premises) service. The nature of FTTP is that up to four (4) different connections can be terminated through the same fibre line and the same NBN NTD (Network Termination Device).

So to test out the issues one of our customers was having, we provisioned another NBN 100/40 connection into the site using a different carrier – one that is more expensive but also has a much lower level of potential congestion.

So after the second service was provisioned we have two NBN FTTP 100/40 connections running through the same piece of fibre, the same NBN NTD and into the same device on the client premises.  Everything is identical except the ISP.

We then ran a number of tests.  The tests were isolation tests; meaning that we tested the speed of the connections with no other traffic running on the services – so the only data on the links was the test data. The far end test node is the same device, the test process was identical. The results were very surprising.

We ran a number of tests on the night.

The graphs below speak for themselves, but:

Remember, both connections had exactly the same test run and the nodes at both ends is the same node.  These two tests were run 30 seconds apart!

To verify the results we ran a number of tests over a 4 hour period and saw the same results. 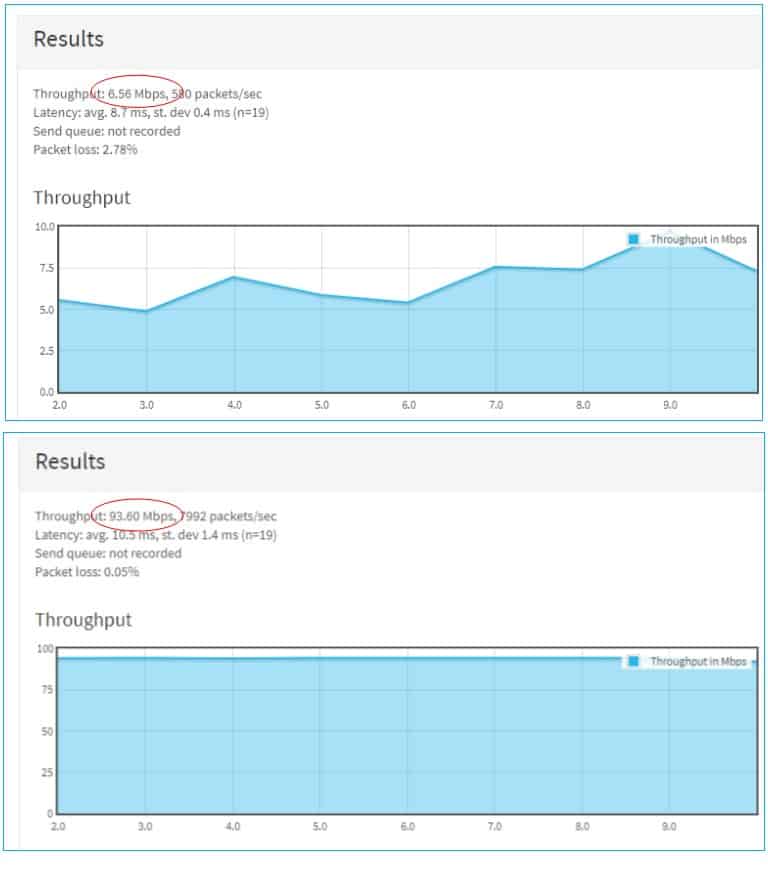